From Tadpole to Full-Grown Toad

If you watch RVs going down the road, you'll notice that most of them tow a vehicle behind them. Most of these vehicles are flat-towed--that is, they are towed with all four wheels on the ground.

Unfortunately for RVers, the choice of which cars can be flat-towed is limited, especially if you want to operate a car other than a sedan, such as an SUV.

When we bought our first RV, we owned a 2006 Nissan Murano. Unfortunately, it was one of the cars that was not towable. So we had to shop for another car. We settled on the 2009 Chevy HHR, which we misnamed "toad." ("Toad" for "towed"--get it?)

I say "misnamed" because the HHR, although a fun car, was a pretty basic vehicle. And, it was small. It was more like a tadpole, rather than a full-grown toad.

The car was OK, but I was never in love with it. Reliable? Yes. Good mileage? Yes. Cute? Yes. Comfortable? Yes. (Actually, the seats were much more comfortable than the Murano's.) But it was small and I always felt cramped. And it didn't have some of the things I really liked in the Murano, such as a backup camera, a compass, and dual climate controls.

Jim liked the HHR better than I did, but he agreed it was time to look for a bigger SUV.

We did our homework, and we tentatively decided on a Ford Edge, a 5-passenger crossover SUV about the same size as our Murano. Before we made a decision on that car, though, we had to test-drive it.

So, while we were in Orlando last week, we spent an afternoon at CarMax and then at Greenway Ford. We narrowed our selection to the SEL model, which came with most of the things we wanted. You can probably guess what happened: We found a low-mileage 2011 Edge 2011 and  negotiated a really good deal.

I like it. No buyer's remorse. It has the features we wanted. We can even talk to it and it does our bidding. If I say "Radio," it asks what station I want. If I tell it "Climate," it asks what temperature I would like.

Of course, our new toad is not yet equipped to be towed, so I had to drive it home--in a driving rain. (I confess that I almost wiped out when I hit some standing water on the highway, but the car responded admirably and everything was OK.)

Jim hasn't decided if he will put on the towing base plate himself or will have it done. (I vote the latter.) We don't plan to travel for a couple of months, so there is no hurry.

But it's nice to know that when we do travel, we will be comfortable when we take off on day trips.

When Marcus Lemonis, CEO of Campingworld/Good Sam, came to the grand opening of its Jacksonville operations  two years ago, he held a raffle and gave away tremendous prizes to virtually everyone who came out that Friday evening. And he made us fall in love with him.

We almost did not go to that event. It had started to rain, and the open house started during rush hour. (Traffic is horrible in Jacksonville at any time, but especially at rush hour.) But, we went. We nibbled on whatever snacks that were gluten-free. And we found a Fantastic Fan (an overhead exhaust fan) to replace one that didn't work in Baby, our first RV.

We were ready to check out, but I checked the time first. It was only 15 minutes until Marcus would begin the drawings for prizes, so we decided to wait. Maybe we would get lucky, I told Jim. Maybe we would win (say) $50.

We won much more than $50. Marcus asked each winner what was on their shopping list for that day, and then he gave them those item(s). When Jim and I realized what he was doing, we decided (if our name was called) we would ask for not only the fan, but also a satellite dish. (We could dream, couldn't we?)

A few minutes later,  Jim's name was called. I went up to Marcus, and he gave us our gifts. The retail value of the satellite dish, fan and installation was more than $2,900. Wow!


A few months after we bought Junior (our current RV), we arranged to have the gifts installed. About the same time, we quit U-verse home TV service, and subscribed to DISH satellite service, opting for receivers that could be used in the RV.

We have transported the receiver to the RV several times, but I think we were only successful in watching satellite RV once, because the other times we forgot to bring the remote--just like we did this week. You can't watch satellite TV without the clicker.

Because we (again) forgot the remote, Wednesday seemed an opportune time to purchase a receiver and install it permanently in the RV--especially since we had received a flyer last week from Campingworld that it was on sale for only $75.

That flyer, of course, is sitting on Jim's desk at home. But we figured the receiver would be on sale at the local Campingworld. It was--but not for $75. It was marked down to $99. But would you believe? Although the manager could not find the sales flyer we mentioned, he sold us the receiver for the amount we told him was advertised. (We told him we could wait until we got home, but he insisted.)


Jim spent the afternoon installing the receiver, which allows you to use your own hard drive to record programs. We brought our hard drive with us, and we are able to not only record programs, or watch them live, we can also watch shows previously recorded. Just like at home.


Why did we buy the receiver? It is a tight fit to put the receiver into the audio/visual cabinet. Now we don't have to go to that trouble any more. Plus, at the end of May we are going to discontinue DISH services...cut the cable, so to speak. We have Chromecast on two TVs and Roku on the third, with subscriptions to Netflix and Hulu+, so theoretically we will be able to watch whatever we watch now, just without the expense of DISH, whose costs have escalated over the two years we have had the service. Watching TV in this manner will require adjusting our viewing habits, but we will get used to doing that, just as we got used to only have two receivers and not being able to record as many shows as we had when we had U-verse. Less TV is good, in my opinion.

But, when we are on the road, we can subscribe to DISH on demand, one month at a time. If we are out for a short period and can get good over-the-air TV, we won't bother. But we will have the option. It's always nice to have a choice.

So, thank you once again, Marcus; thank you Campingworld. We appreciate the satellite dish you gave us.

P.S. We really love Marcus. He's a dynamic business person. Watch his show, The Profit, on CNBC. You can even watch episodes on demand online. In the show, he uses his own money to buy businesses and turn them into much more than the owners had ever dreamed. But, sometimes the deals don't work out, and he walks out if the owners don't live up to their part of the bargain. One of the businesses he bought, Automatch, just expanded to Jacksonville. 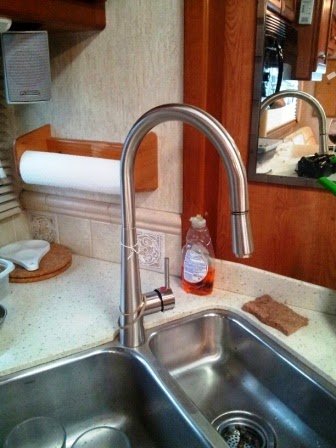 I don't know how "exciting" this week will be, but it should be relaxing. Until next time,