Even before we adopted Katie, we had decided that we would invest in hiring a trainer once we acquired a dog, if only to reinforce basic commands. The question was, “Which trainer?”

Most pet stores offer some type of group dog training, which would be the most economical, but we quickly realized that Katie would not respond to that training: She was afraid of strangers as well as other dogs and would virtually freeze. Even if she got comfortable in the training situation, she did not respond to treats. She had never had treats as a breeder dog.

One of the people at our vet’s office recommended Sit Happens dog training company. Danny, a representative from the company, came to our house to explain the company’s philosophies, show off its successes, explain how the training worked, and observe Katie. 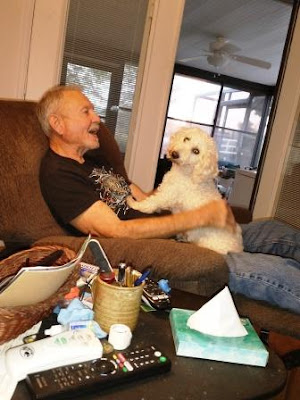 Danny said Katie’s disinterest in treats was not a problem; Sit Happens recommends using an electronic collar for training. The pulse does not hurt the dog, but the dog responds well (and quickly) to it. We agreed this type of training would be appropriate for Katie, and agreed to purchase the collar. We then debated if we should buy the three-lesson or five-lesson package. (The five-lesson package included lifetime reinforcement training, if needed.) Naturally, we expected Danny to recommend the more costly five-lesson package.

After observing Katie, though, he said, “I don’t think you’ll need the five-lesson package.” He was right; we barely needed the three lessons we bought, because Katie is a quick learner—and because I was committed to do the practicing required. After two lessons she was doing three basic commands: “Katie, come,” “Katie, sit,” and “Katie, place.” (This last one tells her to stay in her bed or her “place” in the living room.) She also quickly learned, “Katie, stay,” although she doesn’t always stay as long as I would like her to. We’re working on that, however.

One of the things our trainer Michele did not have to teach Katie was to stop barking at and jumping on strangers. Once in a while (not always) she will bark when someone comes to the door, but she hushes quickly at my command. And she does not jump on people. Although Michele did not have to teach Katie restraint with strangers, she did have to teach her something that most dogs do instinctively—to jump up onto furniture! Unlike any other dog I have ever known, Katie did not know how to jump on the couch or a chair. Michele showed us how to train her to “up.” After some reluctance, Katie learned and discovered it was fun to jump up! 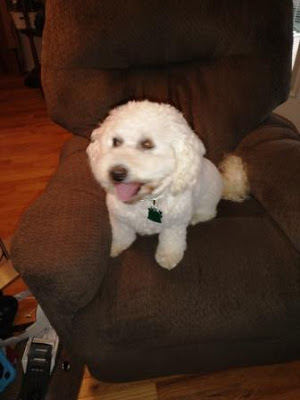 During those first weeks of training, I diligently worked with Katie on her commands several times a day. As she was learning to obey, Katie decided that our training times were play times. Consequently, whenever she wants to play, she demands going through our training routine, especially the “Katie, up!” command. (Interestingly, she rarely jumps up on the couch or a chair on her own, only when we tell her to.) And when I decide play time needs to end, I command her to “Katie, place” and go to her spot in the living room, where she sits and gets quiet.

I no longer need the collar to make her obey. She can even be out in the front yard without a leash, when we are out there.

The training was expensive, but it was well worth its cost. Sit, does in fact, happen.

An Awesome Dog, Despite Her Beginnings

Before adopting Katie, our rescued Bichon Frise, who was raised as a breeder, I had had only two exposures to dog breeding. The first was about 50 years ago. Our next-door neighbor had purchased an English Sheepdog, a big, beautiful, gentle animal with a full, bushy coat. She was a pet, but the neighbor also intended to breed her and sell the pups. I don’t know if he ever did, since we moved out of the neighborhood before she was bred.

Fast forward to last year: We were storing our truck camper in the backyard of a lady who bred dachshunds. At that time she had a female wiener dog and five offspring. The female was her pet, and I believe she intended to keep most (if not all) of the current litter. She raised the dogs with love and kindness, because they were her friends first and an income source second.

Periodically I had read about puppy mills; there are many in the rural areas of Florida and southern Georgia. These animal farms breed for profit, at the cost of humane care for the dogs. Females in puppy mills are forced to reproduce each time they are in heat, until they can no longer bear. The dogs live in tiny cages, receive little care or exercise, and have no interaction with people. Often their cages are filthy, and they lie in their own excrement.

According to the Humane Society, most dogs sold in pet stores or online are bred in such deplorable conditions.

Katie was raised to breed, but she did not come from a puppy mill. The “dog lady” (the head of Wags-Rescue, in Jesup, Ga.) said she had developed a unique relationship with a local breeder, who had approached her to adopt out dogs when they reached the end of their breeding—five years. The dog lady said the breeder had a dedicated barn in which she raised many different types of dogs. Each dog had its own kennel as well as a dog run and was able to exercise. All of the dogs, male and female, received regular shots and veterinary care. The dog lady had inspected the breeder’s establishment and was satisfied that although the dogs were not pets, they were cared clean, manicured, and cared for. Consequently, she often had purebreds available for adoption.

A key phrase in this description is “not pets.” I didn’t realize the implication of that phrase until we brought Katie home.

On the drive home, I held her on my lap; she trembled the entire two-hour ride to her forever home. Car rides were foreign to her. At home, she quickly learned where her water and food bowls were. And she acclimated to her new bed in our room.

But she had no social skills, actually no “dog” skills either.

You know how dogs are naturally curious and chase squirrels and anything else that moves? She didn’t. I don’t know if she had ever been exposed to a squirrel or a lizard (or even other dogs, except for male breeders), since her life had been limited to a dog run. It was a couple weeks before she was willing to take a walk on a leash. (During the first attempt at a walk, she froze after about 25 feet. I had to pick her up and carry her home.)

For weeks when we took walks, she would stop abruptly whenever she saw another dog, cat, or human being. She would refuse to move until the “creature” went away.

Fortunately, Katie is learning how to be a "real" dog. I am happy to say that now she is not spooked as often by human beings who are out taking a stroll or bicycling the neighborhood, and although she still goes on alert when she sees another dog, she is willing to passively make friends with it.

She loves to be outdoors, but she still does not venture out on her own, despite our encouraging her by keeping the back door open to our fenced-in yard. Freedom is apparently a learned thing.

As time passes, however, Katie is gradually coming out of her shell, and her personality shines. My husband said it best: “She is an awesome dog.” More about that later.