I have moved more than 20 times in my life, sometimes from a larger house to a smaller one. But always I had storage options. Even when I bought my co-op in Chicago, I had a storage space where I could stash boxes I had not opened in 20 years. (Yeah, I carted them all over the country. My moving costs were most always paid by my new company.)

Moving out of 40-foot motorhome that had around 400 square feet of living area and  huge "basement" storage compartments into a 26.6-foot (OK, round it to 27-foot) motor coach (RUV) is challenging, to say the least.

As I was boxing up our stuff from Junior, I found items we had forgotten we had and had never used. I even found a half-set of knives still in its thermo-plastic encasing!

I could go on.

We had seven or eight mid-sized boxes stowed in our attic. I filled all of them, and found other containers to fill up--all with precious "stuff" from our motorhome days. Now my dilemma is, "What do I do with all of this?"

Downsizing requires making tough decisions and getting back to basics. So, right now I am going through each of these boxes and deciding what we really need. Probably not nearly as much as we had. We just had the luxury of space in our first two RVs. Not so, now.

The other dilemma is how to stow the things we need. Our new RUV has quite a bit of storage in the cabin and bedroom areas, but it is not the same type of storage as in Junior, nor is it in the same places. I will probably forget where I put things. Oh, well. Eventually we will find them.

I'd better get back to my work.

A new generator and...

We bought a new generator yesterday. If the power should go out here when the storm from Hurricane Irma hits, the generator should be able to keep our refrigerator going, our TV on, and probably a couple of fans to cool us off.

The generator is quite mobile; it is located in our new RV, which will be parked in our driveway during the storm.

Yes, we did it again.

"Junior" was such a bratty "child." Very cantankerous. And the older he got (he was fast becoming a teenager), the worse his behavior became. It got to be that Jim was always working on something in that RV. RVing was not as pleasurable as it should be. So, we made a decision to either sell Junior or to trade him in.

When we went to the Tampa RV show last January, we saw some RVs we really liked--a new type of class A motorhome called an RUV, a recreational utility vehicle.

Junior was a motorhome, in the truest sense: At 40 feet long and with its three slides open, it offered around 400 square feet of living area, as well as a very large storage capacity in its "basement." It was truly a house on wheels, with all the comforts of home, including a washer-dryer combo.

Junior (and before him, "Baby," our 38-foot, one-slide 1998 Dutch Star) met our needs quite well. We traveled from Florida to California and back (twice), up to the Midwest, and within the Southeast. The motorhome was very comfortable for long trips, especially with pets.

Although we may still make long, extended trips, our needs have changed. We decided that if we were ever to buy another RV, it would be much smaller, one of these new RUVs.

So, last week we started looking. The particular model we really liked was hard to find, especially in pre-owned. New and used RUVs fly off the lot like hot cakes. If we did not find what we wanted (and at the price we were willing to pay), we would not buy; we would just fix and sell Junior.

But, we finally found what we wanted and bargained a price we were willing to pay.

Our new RUV (which does not have a name yet, although Tiny or Midget seem appropriate), is a 2016 Thor Axis. It is only 26.6 feet long, with one slide. That slide extends the back of the RV to accommodate a full-size queen bed. It is about 7.5 feet wide and only 11.5 feet high (compared to Junior's height of 13.5 feet). It does not have any side slides. 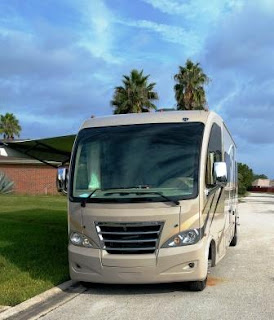 Despite its compactness, the RUV can actually sleep four people: two in the queen bed, one on the jack-knife couch, and one on the bunk that lowers from over the driving section of the coach.


It took us many hot and sweaty hours to pack up and clean out Junior. We found stuff in the corners of drawers that we did not even know we had! Needless to say, we have to be selective in what we store in our newbie.

Jim just took the RUV down to fill up its gas tank (gas, not diesel), so that we are prepared in case we have to use its generator. I have to get back to sorting through boxes and provisioning the RUV with linens, kitchenware, and miscellaneous items.


We don't know when we'll be taking our first trip, but it won't be too far into the future. And I will keep you up-to-date on our hurricane situation via Facebook.

Your (not so) Reluctant RoVer,