Two things I have learned on our winter getaway:

I think most of us take towels for granted. At least I do. I wash, dry, fold, and replace them at least weekly in my bathroom. I automatically reach for my bath towel when I get out of the shower, and I am never disappointed.

Our RUV (recreational utility vehicle) that we have dubbed Thor has small holding tanks, so when we camp at state parks (which usually do not have sewer hookups), we use the wash house facilities. That means we have to take our shower “tools” with us—soap, wash cloth, shampoo, and a towel.

A couple camping trips ago, Jim left Thor without his towel. I laughed. It was funny to watch him return dripping. On our last camping trip, however, I walked to the wash house without my towel. What made my drip-drying even worse was that I had taken a wrong turn out of the wash house and started to walk in the wrong direction—in the dark of night. (After about 50 yards, I realized my mistake and turned around.) When I got back to Thor, Jim laughed. I didn’t think it was so funny.

Last night, I gathered my soap, shampoo, and wash cloth. As soon as I got to the wash house, I realized I had (again) forgotten my towel. It was very chilly outside, with temperatures hovering around 50 (or lower) by the time I had gone to shower. Should I return and get my towel? Or should I drip dry? I decided to drip dry. It actually was not too uncomfortable walking back to the RV wet.

Jim had a laugh.

Not so much. Wednesday I caught a crab on my fishing line; the crab was trying to get a free dinner and latched onto the bait. We used it for bait. Yesterday it was so cold we didn’t even go out. Today, it was warmer (around 60) and sunny, so we ventured out. After an hour or so, I finally caught a flounder—my first ever. Although I had a few other bites, I had no catches. Neither did Jim.

Jim assures me that fish are there, even in cold weather. We just can’t find them, fishing from shore. So, fishing in cold weather is a test of patience—and endurance of the chilly temperatures.

Tomorrow we head home. Despite the lack of catchin’ we had a good time.

The thermometer reads 55 degrees. With a brisk wind blowing at about 10 mph, it is too chilly to fish. (We tried that the last two days, with cold hands and zero results.) So, instead of fishing, today we continued our exploration of the Ormond Beach-Daytona Beach areas.

A scenic drive that followed the Halifax River took us from Ormond Beach to Daytona. After leaving a residential area of charming old houses, we found ourselves on a stretch of city street in Daytona. A sign said “dog park.” But beyond the obvious frontage of the park we could see an island linked to the mainland by a footbridge. Curious to see if it was possible to fish from the island, we parked and made our way over the footbridge.

The island was called Manatee Island. On it, there was, indeed, a fenced-in dog park with areas for small dogs, big dogs, and bad dogs. (Only only little pooch was running around in the little dog area, with its owners. He didn’t care for us too much.) Apparently this little island, which also had a children’s recreational area, was home to manatees, although we didn’t see any today. There was also a broken-down fishing pier. No one could use the pier, but seagulls made it their home. Neither of us had ever seen so many earth-bound seagulls at one time.

After leaving the dog park, we kept traveling south to the old city center of Daytona Beach. We found a large library, a baseball field (minor league play), and a variety of shops. We were in search of one in particular—Angell & Phelps Chocolate Factory.

Yum! The smallest shop was filled with all sorts of delectable handmade chocolates. At 11 a.m., one of the clerks led us on a tour of the factory. Actually, the “tour” was an explanation of how chocolate is made and what each of the chocolate workers (observed through several large windows) was doing. The tour ended with each tourist sampling two pieces of chocolate. Each person could select the type of chocolate s/he wanted. I picked chocolate-covered bacon (yes, it is real and tasty!) and a turtle. (They have another name for those chocolate-covered pecan-caramels, but I don’t remember what it is.) Jim chose a chocolate-covered potato chip (true!) and chocolate-covered bacon. (The shop says these two are its top sellers, in that order.)

Need I say that we did not leave the chocolate factory empty-handed? Before the tour, we had sampled its fudge. We left with a half-pound each of chocolate fudge, chocolate-peanut butter fudge, and (because it was “buy two, get one free) orange-vanilla fudge, as well as a package of chocolate-covered bacon.

After the chocolate factory, we continued our tour of the area, just to see what this part of Florida is like. Would it be somewhere we might want to live? (Whenever we visit a new area, we take a “gut-feel reading” of the area.) Ormond Beach, mostly yes. It is actually quite nice, especially away from the beachside area with the usual surf shops. Daytona Beach? Mostly no. Near the beach, you would think you had stepped into the last century, specifically in the 1950s. I wasn’t too impressed with other Volusia County beach communities, either, including Port Orange, Daytona Shores, and Ponce Inlet.

Tomorrow it is supposed to warm up a bit, almost to 70. I hope the wind dies down and the fish get hungry.

Exploring Ormond Beach in the cold

“Oh, the weather outside is frightful…” It is weeks after Christmas, but the line from that carol echoes in my head, because it is cold outside. Today it is in the 50s, quite a change from when we arrived at Tomoka State Park in Ormond Beach, Fla.,yesterday, amid temperatures in the sunny 70s.
The park straddles the Halifax River and offers many places for fishing, kayaking, canoeing, and hiking. (We will stick with the fishing.) 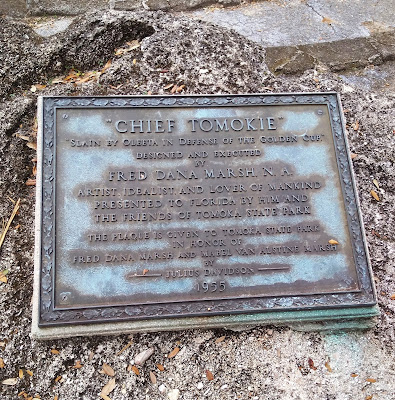 Despite today’s chill, Jim and I decided to venture out and explore the area and perhaps dip our fishing poles. (We did that, but only briefly. Too cold! Brrrr.)

We drove south on U.S. Hwy A1A (the scenic highway that hugs the Atlantic coast all the way south) to Daytona, only about 15 miles away. Our mutual impression of Daytona Beach (my first visit): ugly square buildings. To be fair, however, we were only in the beach area of the city, and beach communities are traditionally very trashy and commercial. I suspect that the rest of the city (on the other side of the intracoastal waterway, the Halifax River) is much nicer. (At least, I hope so.)

The intent of our initial drive around the area was to find places to fish. We are constantly amazed at how well these smaller communities we have visited have developed riverside (and oceanside) parks, complete with fishing piers. For example, Ormond Beach has developed beautiful parks with fishing piers and sheltered pagodas on both ends of the bridge that spans the Halifax River. Daytona Beach has a fishing pier on the ocean. Neither community charges a fee to use these facilities.

Jacksonville is virtually surrounded by water—several rivers and the Atlantic Ocean—yet there are few good places to fish. As an example, the Atlantic Blvd. and Beach Blvd. bridges that span the San Pablo River would be perfect places to fish—except that to access the water you have to climb over some serious rocks (if you dare; I don’t).

Oh…and the fishing pier in Jacksonville Beach? Users have to pay a daily fee to fish, or even to stroll down it!

As Jim and I were driving around and exploring possible areas to fish, we discovered a hidden gem in Ormond Beach: The Casements, the winter home of John D. Rockefeller. This house has been restored by a historical society and is open to the public. It is used for meetings, weddings, and fund-raising. It is also open as a free museum with either a self-directed or guided tour. We learned quite a bit about this beautiful old house, as well as Rockefeller, whose source of wealth may be dubious but whose distribution of that wealth has done much good through various foundations.

After lunch at an excellent Greek restaurant, we braved the elements to fish—for about 30 minutes. The north wind was just too much, especially as the temperature dipped into the mid 50s. We finally called it quits for the day and went home to Thor to thaw out.

We picked up a lot of literature about Volusia County, in which Ormond Beach resides. If the weather (or at least the wind) remains too cold for comfortable fishing, we’ll do some more exploring tomorrow.