Glass-making never fails to amaze me. And when it is done by a master, the results are just awesome.

A few years ago, when Jim and I were in Tampa, we visited the St. Petersburg Morean Art Center, where we saw the glassworks of Dale Chihuly. We had seen a roving Chihuly exhibit in Orlando a number of years earlier. (I purchased three posters at that exhibit. I believe they cost me $35 each. Getting them framed cost $400! But they are worth it. I love those posters.) 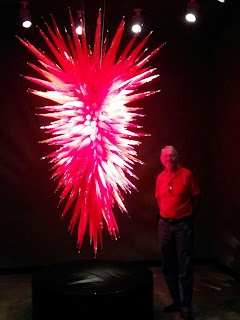 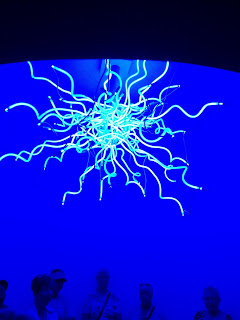 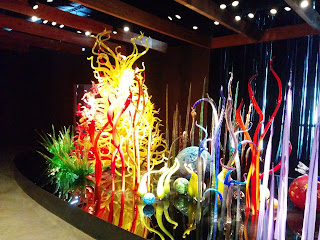 We learned that a new Chihuly museum opened in St. Pete, so we decided to go see it.

Although the exhibit is in a new building, I don’t think there were new pieces on display. We enjoyed seeing the exhibit again, but we were disappointed that there were no additional pieces exhibited.

St. Pete seems like a nice community. When I was growing up, I only knew of St. Pete as a retiree community; it was where Midwesterners emigrated. Jim said it was known as the place where northerners went to die;]. Today I would say, not so much. The area surrounding the museum is known as the Art District, and it seems to attract a younger crowd, with many galleries, eateries, trendy shops, and bars.

I liked St. Pete; Tampa, maybe not so much—at least during rush hour. It took us about 90 minutes to get “home,” when it should have taken half that time. I think I would like Tampa (better than Jacksonville), but I would not want to work and commute in Tampa. (I wouldn’t want to commute in Jacksonville either, but Tampa is worse.)

Last year at this time, Jim and I planned to go to Tampa, attend the Super RV Show, and do touristy things.

It didn't happen. First, Jim found a fuel leak and a rusted-out manifold. Those malfunctions made us cancel our trip. Then, he came down with an ear infection that required powerful antibiotics. Once he had conquered that infection, he had some other issues that needed attention. Before we knew it, a year had gone by.

But, I am happy to report that we are here in Tampa, and we have not had any (mis)adventures with the RV!

On our way here, though, we were one care behind an accident. Somehow, a pickup truck shot out through an intersection. It hit another car and went across a ditch. Jim called 911. The driver, I think, was injured. The accident may have been caused by a medical condition. Fortunately, we were not involved and we arrived safely at our destination.

Today we went to the RV show. It really is a super show. We walked until I thought my legs would fall off. Mostly, we went through the supplier areas, where we signed up for drawings for free RV stays. (We actually won a week's stay at a resort on Florida's west coast.) We did look at a number of Class B and B+ RVs.

We have been talking about downsizing. We love the size of our RV, but in reality, it is more than we need, especially since we seem to be taking shorter trips and Jim accepts that I do not want to go full-time. A Class B is like a converted van. Its advantage is that it can be used as a second car (actually gets good mileage). Its disadvantage is that it is small--less than half the space that we have now. Although Class Bs have shower baths, they are tiny and are usually wet baths, meaning that the whole bathroom becomes a shower. B+s are larger and usually have a slide. We like them, but...we don't love them. And, their cost is high.

We were on our way out of the RV show, when we saw a lineup of small Class As. This class is actually something relatively new; they are called RUVs--Recreational Utility Vehicles. They are to big Class As the same as crossover SUVs are to full-size SUVs.

We actually found one model, the Axis by Thor, we really like, and in the future we might consider buying it. It would be perfect for us. (See https://thormotorcoach.com/axis/.) Thor has another model, essentially the same, called the Vegas--sort of like the same type of care made for both Chevy and GMC. We liked the model enough to get a quote from the dealer, but his offer on our trade was insufficient for us to buy.

We have a lot left to see in this great country, and RVing is a great way to see it. We also have a lot of other things we want to do, including throwing out a fishing line from our little bass boat. The nice thing is, we don't have to do anything if we don't want to.

And right now, that is exactly what I want to do--do nothing except digest the wonderful dinner we had from a little local Haitian restaurant. The curried and fried goat (no, not vegetarian!), rice with spinach, brown rice, plantains, ox tails...of every bite was so good!

I am going to savor it now.