Tricks and treats at Sebastian Inlet

Last night was Halloween. Nobody was in costume at Sebastian Inlet State Park, but Jim and I received both tricks and treats. First the tricks:

We got locked in again—just like the other day. Jim again had to exit through the escape window in the bedroom. The first time this happened (a couple days ago), he had discovered that the door would not open because a screw had worked its way out of the latch on the door jamb. He tightened the screw, but when I discovered it coming loose again the next day, he removed it.

Last night, as he was going to the shower house, he couldn’t open the door. The latch, held in by only one screw, had become dislodged enough so that the door would not open. So, Jim had to put on his clothes, climb out of the window, and pry the door open.

Jim says the fix is easy: apply Locktite to the screw. I hope we don’t have any more problems between the time we leave and when we get home. We have to go in and out several more times. Wish us luck.

Another “trick”—the no-see-ums. I am one big bite--actually, I have hundreds of tiny bites, from head to toe. Literally. And I am miserable.

For those of you who do not live in Florida, no-see-ums are tiny, tiny biting insects, females that seek a protein in vertebrate flesh to use in their reproductive cycle. If you were to spot them on you, you would think they are a fleck of dirt. In the proper light, you may see them flying about, looking like dust.It is virtually impossible to kill them. Slapping at them does no good. By the time you feel the bite, they are gone.

Incidentally, these pesky insects are not always deterred by bug spray. And even worse: They can come through normal screening.

We have no-see-ums in Jacksonville, but they are not as bad as they are here. Also, they do not bother us on our screened in porch because the screening is fine enough to keep them out.

The no-see-ums are the worst part of this state park. All else is great…which brings me to the “treat” section…

It was a real treat fishing here. Jim caught his first red(s) on Tuesday. Yesterday, he caught two slot-sized black drum (17 inches and 15 1/2) and a slightly undersized red, as well as numerous jacks and even a baby grouper.  Me? I just caught some small jacks that I threw back and encouraged to grow up and almost caught a red, which shook off the hook at the last minute. (I’m pretty sure it was undersized, though.) 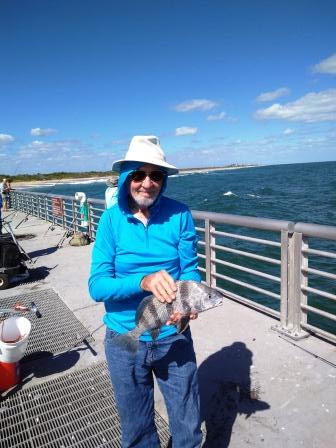 In addition to our own catch, we were given treats by fellow fishermen. A neighboring fisherman caught a huge jack but didn’t want it. (Jack is considered a trash fish, and many people don’t keep them, but we have found that if properly prepared, jack is delicious. In fact, most "trash" fish can be prepared to taste good.) That big fellow went into our cooler.

The second treat came later in the afternoon, when a school of mullet swam directly in front of the fishing jetty. It was a huge school—hundreds of fish.

The most common way to catch mullet is by casting a net; they don’t usually take bait on a hook. We didn’t have our net with us, so we were out of luck. (It was exciting to see the school, however.) But a fellow who had a really big net (perhaps 10 feet in diameter) cast. It took three big, muscular men to haul that catch of mullet up. It weighed a couple hundred pounds, at least. The catch overfilled a large ice chest. I asked the owner if I could have a couple of the fish, and he graciously gave me a couple, which joined our other catch in our cooler.

We will brine the mullet tonight and tomorrow smoke it. Can’t wait to taste them.

The treats were better than the tricks. We always have a good time on our getaways. This little vacation was different: We had a superb time (despite the faulty door latch and the no-see-ums)!