Jacksonville, Fla. -- No, we are not on the road. And we won't be for a couple more months. Jim continues with his daily IV antibiotic treatments (to cure the bone infection caused by a cat bite), but his daily medical treatment has not stopped us from enjoying life. Even if we can't travel.

Several months ago, we decided to start fishing. That decision inevitably led to a discussion about all things floating--bass boats, dinghies, canoes, and kayaks.

Kayaks are relatively inexpensive, can be hauled on top of the SUV, and are great for fishing close to shore in shallow areas of rivers, lakes, ponds and marshes. When we were camping in Central Florida a few months ago, our neighbors bought a tandem (two-person) kayak that had foot pedals to propel it. We thought that was pretty nifty.

With research, though, we pretty much decided that a tandem kayak wasn't really good for fishing; it just wasn't big enough to accommodate two people as well as fishing gear. Single kayaks were another thing, however. Jim kept investigating them and remained keen on them. I wasn't so sure. The only way we would know if we would like kayaking was to try it out.

Along came a Living Social coupon offer: $20 (each) for a full-day's kayak rental at All-Wet Sports here in Jacksonville. It is located on Pottsberg Creek, which meanders for miles.

Both kayaks we rented were sit-on-top style. The "kayak master" had only one detachable seat available for rent; I got it. The seat provided some back support, but had no padding. Jim's kayak was a slightly different style. His seat had a mini-back, but no padding.

The kayak master suggested we turn left off the boat ramp into the creek to have a scenic paddle for about three miles. He said that within a couple hundred yards, we wouldn't hear any cars or see many signs of human habitation. He said we might see some manatees (we didn't), turtles (we did), and various birds (we spied some, including a couple of blue herons). We also saw thousands of hermit crabs scurrying for shelter as the tide went out.

Our adventure took us upstream, paddling against the tide. It was so quiet, it was hard to believe we were in the city not far from downtown. The water was clear although tannin-stained. We saw a couple of fish jump, but no schools or even solitary swimmers.

Paddling a kayak is not a difficult skill to learn; nevertheless, I got hung up a couple of times on sunken tree trunks and shallow water. All in all, we had a good time. When I looked at my cell phone (safely stored inside a clear dry bag), I was surprised at how fast the time had gone by. We had paddled for several hours.

We learned some things:


That last point is the most important probably. If we ever sell our house and buy one on some water, we might buy one or two kayaks just for fun. But we really don't want to fish from a kayak. Too much work to get to where you want to go and too much distraction to try to paddle and fish at the same time.

I'm glad we had our little adventure, and I would probably do it again. It was fun; it was serene.

But I think we will consider buying a small boat for fishing.

Before I close, a word about the pictures I did not take. I didn't want to take my cell phone out of its waterproof bag, but I was willing to risk harm to my inexpensive Kodak camera. I had put new batteries in the camera before we left home, but the camera malfunctioned and I did not get pictures of Jim paddling up the creek or of the blue heron sunning in a tree. I'll have to let you use your imagination to "see" those images.

Teresa was anticipating a great vacation with her two kids. (Marshall is working overseas.) They planned to drive up to Kentucky to spend some time with her family and enjoy the cooler weather in the Midwest. This was not the first time she has ventured out in the motorhome by herself; she has successfully driven it (and her Wrangler toad) several times.

For this trip, she stowed clothes, food, and gear into the motorhome; hitched up the Wrangler; gassed up both vehicles; checked all systems; put the cats and kids on board; and fired up the engine.

A few miles (literally) down the road, disaster happened. The Wrangler caught fire and the fire quickly spread to the motorhome. Both are total wrecks. Fortunately, everyone (including the cats) got out and no one was hurt. 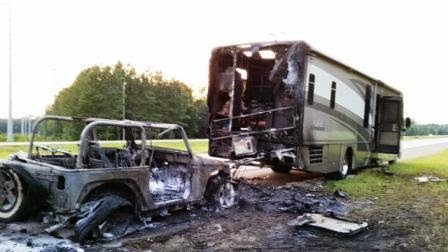 Teresa reported that the fire department responded quickly, but not fast enough to save the vehicles. The Jeep, incidentally, was a new 2013. It didn’t have too many miles on it. The motorhome was a 2007 gas driven, 38-foot RV that slept six. It contained not only their clothes but all types of duplicate small appliances and kitchenware, such as mixer, rice cooker, pots and pans, storage equipment, etc.

Cause of the fire? Still unknown.

We had a similar (but far less devastating) incident the first time we towed our car. Jim had hooked up the car (our old HHR) in the RV storage lot and towed it about five miles. We were turning the corner on Beach Blvd. to Hodges (about two miles from our house), when someone yelled that we had lost a hubcap from the car. Jim pulled over and we discovered that the brakes had locked up and we had essentially dragged the car for about five miles. No fire, but we had to replace two tires and redo the master brakes and brake shoes, if I recall correctly. Not inexpensive, but at least we did not have a fire.

To make sure that never happens again, every time we hook up the car, after checking to make sure all the lights work properly, I watch the wheels turn as Jim pulls forward several yards. We’ve had no problems since that first time.

We are glad Teresa and the kids and cats are OK. In my opinion, she’s a brave lady even to drive the RV herself. Now she can add to that bravery as having survived an RV fire that could have been disastrous.