This last weekend local recreational vehicle dealers held their annual Jacksonville RV Show at the Jacksonville Equestrian Center. I was invited to sign and sell copies of Don't Back into the Palm Tree! Real Life Lessons for New and Wannabe RVers. 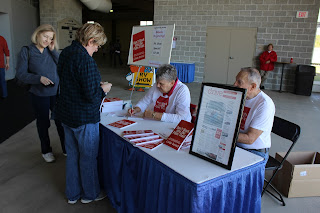 I didn't know what to expect; I had not done any other book signings. A deep-down fear was that I would sit at the table and no one would stop or buy a book! It turned out that my fear of sitting in solitude was in vain, thanks to the Florida RV Trade Association (FRVTA), publicist Ronald Whittington of Whittington PR Marketing and Public Relations, the Florida Times-Union book editor, Brandy Hilboldt-Allport, and the Times-Union Drive Section editor, Joe DeSalvo.

It all started late last summer when the book editor ran a favorable review of my book. (I have to admit that seeing that positive book review created a warm feeling in me!)

After that article was published, the Drive Section editor, Joe DeSalvo called me and asked if I would write an article on RVing for the paper to help promote the St. John's County RV Show, set for October. He also put me in touch with Ron Whittington, who then arranged for me to do a book signing for that fall show.

Ron promoted the show and the book signing. And Joe published my article, "RVing by the Book," on the front page of the Drive Section on September 30. Unfortunately, both the book signing and the RV show had to be canceled because of Hurricane Matthew, which blew through the area. That RV show could not be rescheduled.

The Jacksonville show was scheduled for Feb. 9-12, and Ron again arranged for me to sign and sell books at the show. This time, the weather cooperated. The sunny skies, low humidity, and mild temperature attracted record crowds. The day that I signed books, about 4,000 people showed up.

Thanks to FRVTA's Patty Flanagan, who coordinated the Jacksonville event, the table I was assigned at the show was placed so that everyone who entered the show passed by it. And they had to pass by it again on the way out. I could not have asked for better exposure.

My husband, Jim Cullipher, helped me with the book signing by setting up a tripod with a poster of the book on it and by being my cashier. Nearly everyone who walked by the table read the sign and chuckled, especially experienced RVers. A few remarks were:
Several people stopped to shake my hand, saying they had already bought my book after reading about it in the paper. They said it made them smile while giving them good information.

And people did buy the book. One couple came back to our table after touring RVs and said, "We had to come back to get the book. We talked to three different couples who bought it and they said we absolutely had to have it." That was, perhaps, the most gratifying sale of the day.

In two weeks, I get to sign books again as a finale to presentations I will be making at the Stratton & Company Retirement Summit, to be held at the University of North Florida, from 8 a.m. to 2 p.m., February 25. The free event is open to the public, but reservations are required, since lunch will be served.

Don't Back into the Palm Tree! is available on Amazon.

When we bought our first RV at the end of 2010, I became the Reluctant Rover. Will I now become the Reluctant Boater? I hope not; I really do want to go out in our little bass boat and catch dinner.

We bought a little (10') bass boat about six months ago from a local Craigslist seller. We really got a great deal; the year-old boat itself was $100 less than a new one (exact model) from Academy, plus the seller gave us the trailer, two outboard motors (a very old but sort-of working 6 hp and 3.5 hp) and a trolling motor. (The flatbed trailer alone is worth what we paid for the boat; we can use it to haul many objects.)

In between other projects around the house, Jim has worked on the boat--wiring it for lights, putting in accessories, etc. Then he tackled the motors. The larger motor is ancient: It was built in 1972 and sold under the Montgomery Ward brand! But would you believe? It starts on the first pull, every time. One little problem...it only goes in reverse.

So, Jim decided to use the smaller motor. He had to replace the gas line and filter, but he got it to work. So, yesterday afternoon we took the boat down to a public boat ramp and put it in the water.
That's when I started having doubts about become a boater. I mean, I really want to go fishing, but...
We managed to get the boat into the water without any trouble. Jim hooked up the trolling motor and then started up the outboard. That's when I had to step into the boat. And that's when I started to get nervous. Stepping down into that little boat rocking on the water is like stepping onto a big puddle of jello. I envisioned falling into the river. But I didn't. I successfully got in; I sat down; I held onto the sides of the seat.

Jim powered up the motor and aimed for the river proper--the river that was choppy.

Although I was in a life jacket and I am a good swimmer, I was very uncomfortable as every little wake or wave came at us. I wasn't worried about getting a queasy stomach; I was concerned that the boat might swamp! The chop was mostly caused by the tide coming in, but the waves made me anxious.

After about 20 minutes or so, Jim turned around and we made our way back to the boat ramp. That's when the "fun" began.

Jim and I did it differently. Since this is a little boat, he told me to hold onto the rope and pull it up onto the trailer. Fine, except that the rope is tied to one side of the boat, and the current kept turning the little tyke around! However...we persevered. After Jim backed the trailer into the water, I (and then he) finally got the boat mostly onto the trailer. Unfortunately, when he put the car in gear and pulled up the ramp, the boat slipped off.

We tried again. Same result. He thought I should pull and hold better. Finally, I told him to do it, and I took over the backing-up responsibility.

I've never backed the SUV with a trailer attached to it. I don't think I did too badly, except that it was hard to see where I was, especially since our backup camera doesn't work.

Two more attempts (and an offer from a stranger for help, which Jim declined, saying that I "needed the practice," and we finally succeeded.

Only after we got home did we realize that once the boat had floated onto the trailer we should have used the winch hook to keep it on the trailer as we pulled it out of the water!

I guess that is what is called a learning experience.

We are still married, and we still plan to use the boat. I suspect I will get over my unease, with time, especially if we find a ramp that is on a creek, not the river, where the water is calm and we remain close to shore at all times.

And I also suspect we will become adept at putting the boat both into and out of the water, on the first try.

In the meantime, Jim decided that the 3.5 hp motor would be OK to use if only one person were in the boat, but with two of us, it is under-powered. So he is working on the Monkey Ward motor to see if he can make it go forward as well as in reverse.

I have faith that my Mr. Fixit will find and fix the engine in short order.