October 23, 2019—We returned home today from a great three-day shake-down “cruise” at Little Talbot Island State Park. Our dinner? The shark fillets I had soaking in milk overnight.

A milk marinade takes away any fishy taste and smell, and is especially necessary with shark. We learned that shark must be killed and bled immediately after being caught, to avoid tainting the meat with uremic acid. (Sharks urinate through their skin.) Jim did this on the beach and cleaned the fillets when we got back to the campground. I put them in a milk bath, where they stayed until I was ready to cook them.

How to cook shark? Google answered that. I found several recipes, which served as a basis for our evening meal.

I took one shark fillet and cut it into small one-inch chunks. After arranging the chunks on a plate, I placed a small pat of butter on each, sprinkled them with a creole seasoning, and topped them with shredded parmesan cheese. To cook them, I popped them into the microwave and zapped them for about 90 seconds. They came our juicy, tender, and delicious!

The second fillet I decided to coat in fine gluten-free panko crumbs, mixed with parmesan and the same creole seasoning. I then pan-fried the fillet.

The verdict? Succulent. The meat was tender, juicy, and not at all fishy tasting. In fact, if I were to serve it to someone without telling them what it was, they wouldn’t even know it was fish!
We have caught several sharks when we have gone surf fishing. Some species are protected, but many are not. In the future, we will keep whatever we can.

Until next time (which should be the week of November 4),

October 22, 2019, Little Talbot Island—Rain, rain, go away.
Actually, we are happy to have rain; we have been in a flash draught. However…does it have to rain when we are on vacation?

(Yes, retirees—at least Jim and I—go on vacation. We need to do so; too many things needing attention at home never seem to leave us time to go fishing!)

We went down to Simpson’s Creek (a couple miles from this state park) yesterday. Not even a nibble. We came home and tried the fishing pier. Again, nothing. About 4 p.m., when the tide was receding, I decided to go back to the pier again. Tide change is the time to fish.

As I was standing on the fishing pier, I could see feeding activity in the far-off weeds, a sure sign of big fish, probably reds or trout. Given some time and a bit of luck, I was hoping to catch at least one of them. It was not meant to be. Just as Jim was to join me, he looked to the west and saw the encroaching rain clouds. About 10 minutes later, it started to rain. That put an end to my fishing; I am a fair-weather angler.

The fish are out there. Our camping neighbors went out in their kayaks and pulled in 21 trout. Having a water vehicle, of course, helps in fishing: You go where the fish are. As landlubbers, we have to wait for them to come to us.

Today, we decided to go surf fishing or fish near the inlet (where the neighbors caught the trout). We discovered that we forgot to bring our pole holders (pvc pipe with a contoured lip, which are stuck in the sand). Surf fishing is a lot easier when you have those holders, otherwise, you have to sit and hold the pole. (You are also obviously limited on how many poles you can fish at a time.)

I caught two ladyfish and a catfish. Jim finally caught a catfish and…(ta-ta!) a bonnethead shark, about two feet long. We decided to toss the ladyfish and catfish back, although they (like any other fish) are edible. The bonnethead is a different story.

Bonnetheads are legal to keep. A new regulation in Florida requires anglers who intend to fish for shark to take an online course. Although we don’t intend to fish for shark, we took the course and learned which sharks are legal to keep and which are protected. We also learned through videos that shark is good to eat, provided it is cleaned correctly. That starts with dispatching it and bleeding it out immediately. Sharks urinate through their skin; bleeding them out helps avoid tainting the meat with uric acid from the urine.

Jim filleted the bonnet head, and I have it soaking in milk (also recommended). I don’t have all the ingredients I would like to use to cook it tonight, so the shark will be our dinner tomorrow evening, when we are at home. I’ll post if it was good eating—or not.

P.S. The reason why you are seeing these posts after the dateline is because we have only sporadic LTE. When I say sporadic, I mean 10 seconds or so at a time, a few times a week. State parks should put up wifi towers. Today’s campers need them. At least we have good TV coverage, all Jacksonville channels. Yes, although we are about 30 miles from our home, we are still in the city, which reportedly is the largest (geographically speaking) city in the continental in the United States.

October 21, 2019—We are at Little Talbot Island State Park, about 30 miles north of home. We arrived last night, and we slept well, our first night in our new truck camper.

Although we purchased the camper last month, this is the first opportunity we have had for a “shake-down” cruise. The reason? On the way home from picking up the camper, we had a small accident. The door to the microwave, set in a lower cabinet under the stove (not overhead as microwaves generally are placed) shattered. The drawer under banquette, opposite (but on the same level as) the microwave/convection oven was not latched. It swung out and broke the door. Poor design, and the manufacturer did not have a warning to latch all doors before driving. 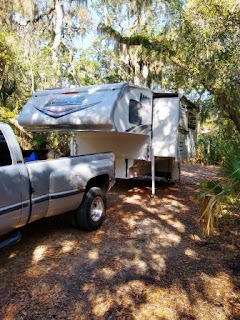 The accident was covered under the warranty, but we had to wait for the part. (I think they installed a new appliance.)

The new camper is slowly becoming our second home: Jim put up a magnetic knife holder over the sink. Very handy, especially since kitchen-cabinet drawer space is limited. He also built and installed a paper-towel holder. (Why don’t they come installed?)

The camper came with a spice rack and magazine racks under the TV (who takes magazines camping?). It also has another magazine rack near the couch. Jim installed a power strip with high-speed USB ports on the side of the rack, which is the ideal size to hold my laptop when not in use. When we get home he will install another small spice rack (which was by the sink) on the back of the banquette near the power strip, to hold our phones and tablets while they are charging. (FYI: This camper comes with several USB outlets, but I suspect they are only 1 amp, not 2.4, which is needed to charge tablets and fast-charge phones.)

We also purchased an ice maker, a real godsend. We had one several years ago in our first RV, but it died over time. This one has a smaller footprint and works pretty fast. Sure beats filling ice trays several times a day, especially since we need ice when we go fishing.

Although the refrigerator (6 cubic feet) is the same size that we had in the old truck camper (and I think, also, in our very first RV, back in 2010), its design is much improved, with a capacity to hold more food.

The new camper also has a good-sized bathroom. Still a bit crowded, but it has a full counter top and more storage than in the other camper. The camper also has larger water and sewer (grey and black) tanks than the other camper. We don’t have sewer hookup here at Little Talbot Island, so we are taking showers at the wash house (very nice). If our tanks are not full Tuesday night (our last night here), we will try our own shower.

The nicest thing in this camper (and the reason why we bought it) is the couch. It is a jack-knife couch (turns into a sleeper), and as such is not the most comfortable to sit on. However…it has two built-in footrests. With a small pillow behind your back, you can sit back, stretch out, and relax. We had no place to do that in either our last truck camper or in our last “big” RV, Thor (27-footer). Thor had a couch, but we could not stretch out well, and the couch was uncomfortable. (It was also a jack-knife sleeper.) The footrest also allows me to use the laptop as a laptop!
This camper doesn’t have quite as much storage for clothing as the other did, but I think it will be adequate. Outside, it has plenty of storage.

Last night, we met our camping neighbors, who have a small teardrop type of travel trailer. We invited them in to see the truck camper. They were in awe of all the space we have. We are too.