Suwannee River, an armadillo, and a black eye

When most people (at least, we northerners) think of Florida, they picture sunny skies, palm trees, and a deep blue ocean (or gulf). But there is another Florida, much different from the Yankee version. It exists in the north central area, where palm trees do not grow naturally and the ocean is a long way off. We visited here a few weeks ago, when we stayed at two different RV parks on the Suwannee River. Seeking somewhere to get away and try our new kayaks, we again sought out the river, but this time we are staying at the Suwannee River State Park outside of Live Oak, Florida.

After we finished parking Junior, we were greeted by a baby armadillo burrowing for grubs in a nearby open space. Armadillos are quite myopic, so we were able to get pretty close before it ran away from us. They are also usually not seen during the day, and when they are spotted, it is usually as road kill. 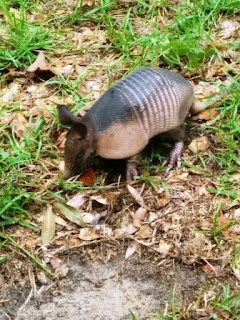 This state park (and all Florida state parks) is a real bargain for us old RVers. We get a 50% discount. I believe staying here for three nights cost us about $40--and that includes water, 50 amp electric service, and even sewer! We are nestled under the shade of live oak trees, only a few hundred yards from the boat ramp, where we launched our kayaks yesterday.

Late last year, Jim and I purchased a number of different kayaks. The first two were 10 footers. Nice kayaks, but they were sit-ins. They were not as stable as sit-on-tops, and they were much, much more difficult to get into and out of, especially for me.

We sold one of those kayaks and gave the other to Jim's granddaughter. We then decided to purchase two pre-owned 12.5-foot fishing kayaks. Lots of storage and rod holders. Pretty stable, and they were sit-on-tops. We bought them for a good price. The problem, though, was that each weighed about 60 pounds. Jim made dollies to transport them from the car to a launch site, so weight was not a problem in land transport. But putting them on top of the car to carry them was another story. They were just too much for the two of us.

We sold them. I don't think we lost any money on them, either.

A few weeks ago, Dick's Sporting Goods had some 8-foot sit-on-top kayaks on sale. They only weighed 39 pounds. We decided to get two.

I practiced paddling in our pond, and I also put a kayak in our pool to practice getting on and off in water (should I roll off). If I were in deep water, I would be in trouble, but as long as I can step off the bottom, I can get on and off all right. The kayaks are also surprisingly stable, very hard to roll. That is a good thing!

So, yesterday, we did our official first kayaking jaunt up and down the Suwannee River. We also fished (did not catch anything). We were out on the river for several hours.

Our biggest challenge (Jim's really) was getting the kayaks back on top of the car. I am sure practice will make perfect, and maybe he will learn a better technique, but it is still a struggle to strap those babies down. Jim is currently wearing a badge of honor--a black eye, which happened when the strap's ratchet swung back and hit him under his right eye.

I am not sure if we will go fishing or kayaking again this afternoon. Tomorrow we go home, where more palm trees grow, the sun shines, and the ocean is only 10 minutes away. But, we have enjoyed our getaway.